Railbikes are chain-driven cycles that are ridden on railroad. Railbike riding is a spor rapidly gaining popularity in European mountain tourist resort. In Korea, we have more than 8 railbike stations alongside the river, ocean and mountains. 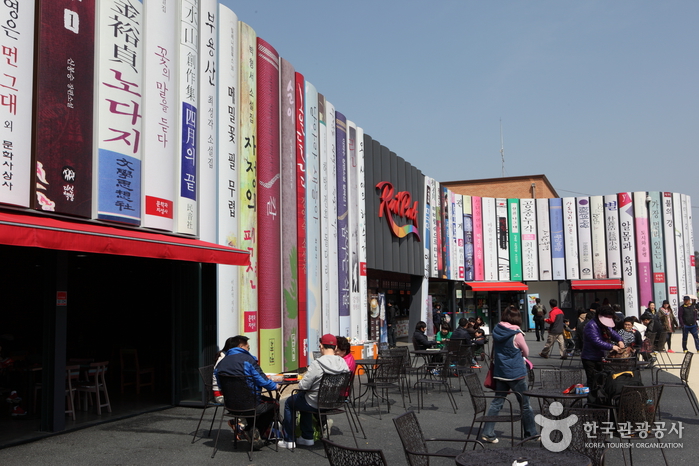 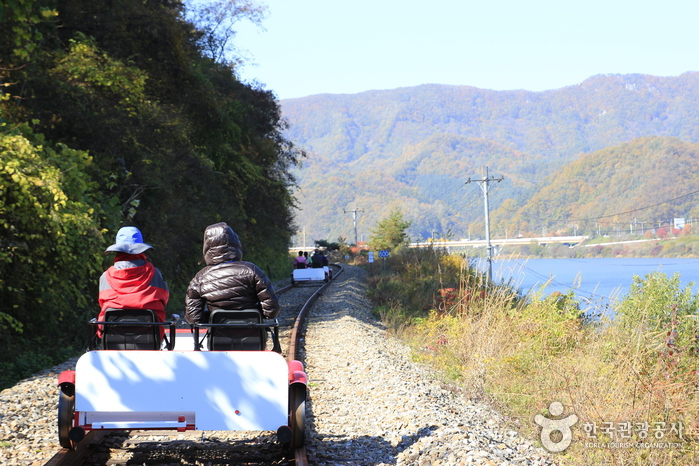 When the Gyeongchun Line, a double-tracked railway line connecting Seoul and Chuncheon, opened on December 20, 2010, it replaced the Mugunghwa train that traveled this route for 70 years. Built on the site where the train on the Gyeongchun Line stops, Gangchon Rail Park is a popular tourist attraction where visitors can pedal along old railroad tracks while taking in the lovely Bukhangang River scenery 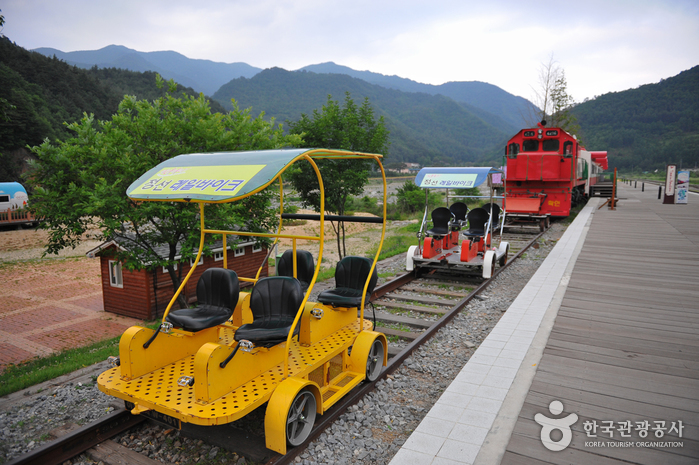 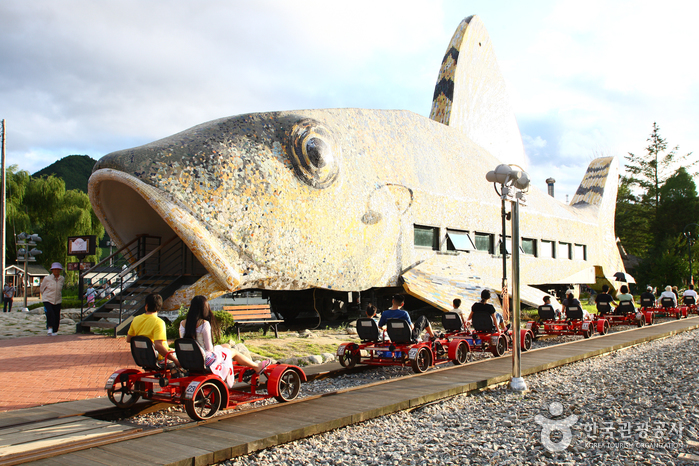 The rail bike in Jeongseon Auraji is a new type of leisure sport that combines biking along a railway and scenic views. Rail bikes are commonly found in the mountainous regions of Europe. The sport makes use of an abandoned railway track that runs from Jeongseon Auraji to Gujeol-ri. The total track is 7.2 kilometers long and is a continuous descent that is easy to ride along clean valley waters and crimson red foliage.

There are 2-person (110 kilograms) and 4-person rail bikes (138 kilograms). Despite its large size, a rail bike runs quite smoothly so it is sufficient for one person to pedal a 4-person rail bike at speeds of 10 to 30 kilometers per hour.
At the boarding area in Gujeol-ri Station, there is a café named ‘A Grasshopper’s Dream.’ Housed in a train, the café is the shape of a grasshopper.

The rail bike starts in Gujeol-ri station and ends in Auraji Station. Ride at a slow speed of 15kph to enjoy the surrounding scenery. On the way back, you will return to Gujeol-ri on a free train for a comfortable ride with a view. 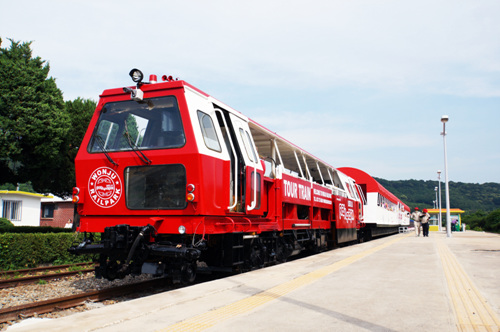 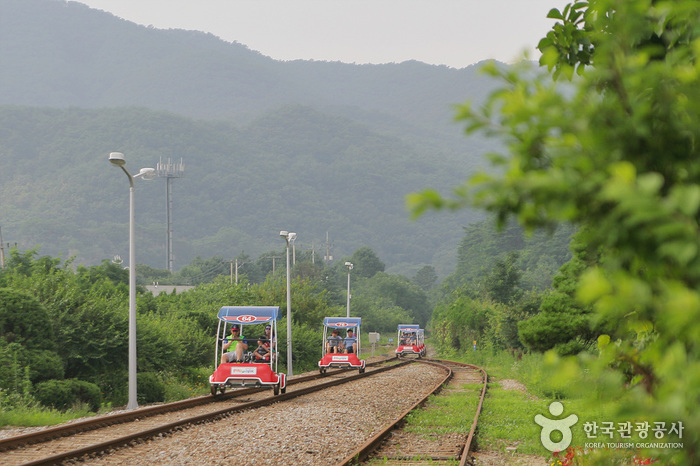 In Wonju Rail Park, you will be able to take a train from Ganhyeon station to Pandae station and transit to rail bike and run back from Pandae station to Ganhyeong station. The course is not hilly so it’s easy to run the bike and you can enjoy the beautiful scenery. Total journey will cost about 1.5 hours including 20 minutes (train) and 40 minutes (rail bike) 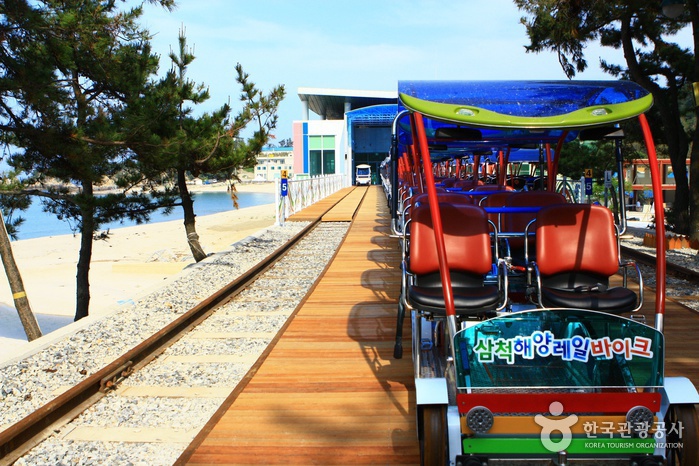 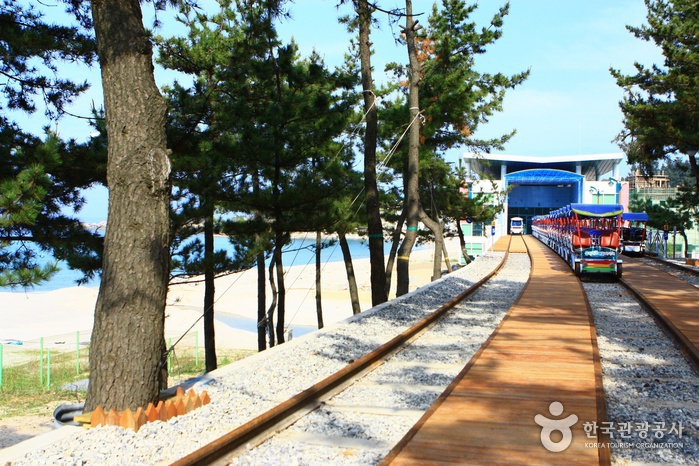 Samcheok Ocean Railbike is a four-wheeled bike on a 5.4㎞ rail that lies against a splendid backdrop of East Sea. Along the rail are Gungchon and Yonghwa Stations as rest stops, an observatory lounge, an ocean tunnel, and many
more attractions. Since each bike has safety installations (double breaks, safety bars, etc.), it can be enjoyed by the whole family. 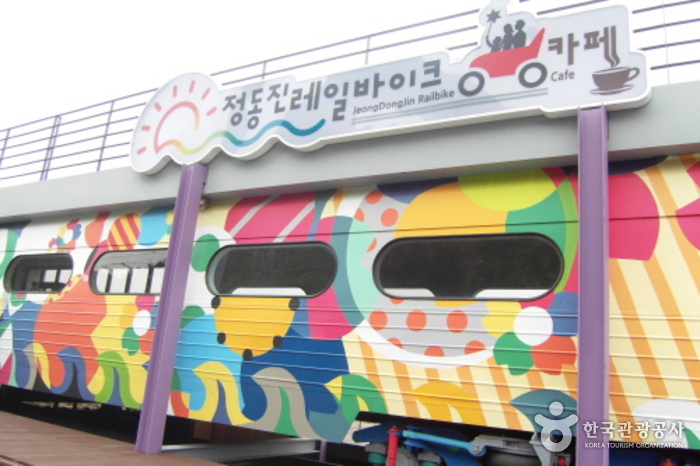 Jeongdongjin in Gangneung is in the Guinness Book of World Records as having the unique distinction of having a train station that is located the closest to the sea, in the world. It has been famous as the best spot to see the sunrise and has a rail bike running from Jeongdongjin station letting you see the beautiful ocean view all the way while on track.

Jeongdongjin in Gangneung is in the Guinness Book of World Records as having the unique distinction of having a train station that is located the closest to the sea, in the world. It has been famous as the best spot to see the sunrise and has a rail bike running from Jeongdongjin station letting you see the beautiful ocean view all the way while on track.

High1 ChooChoo Park is a train experience resort and along with the great nature that surrounds it, it holds the country’s first mountain railway and wonderful train programs for men and women of all ages to enjoy. A mini train on a zigzag, switchback railway, an incline railway, the country’s first high-speed rail coaster, exotic mini train and various exciting train programs will offer your children hopes and dreams and bring wonderful memories back to you. 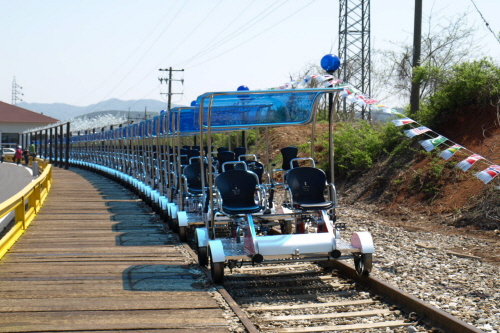 The rail bike can be a new adventure experience for you. The 4.3 kilometer-long lake rail bike trails opened back in April 2016, and now this tourist attraction has become popular among local people. Due to its popularity since it has been opened, booking in advance is highly recommend before showing up. There are several fun spots installed for tourists to be enjoyed. 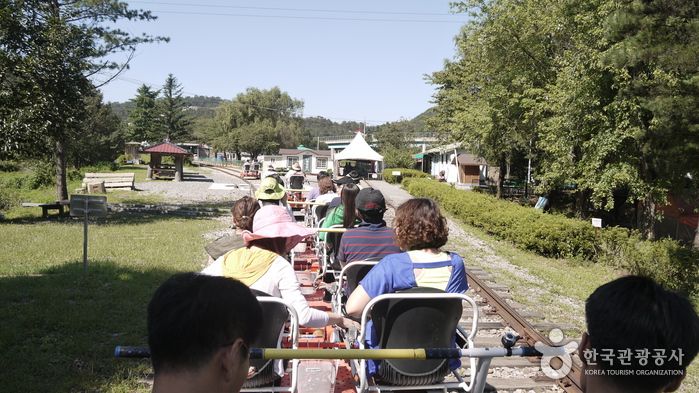 The Mungyeong Rail Bike is a specially-designed bike that runs along the very same tracks that were once used by a trains carrying coal across the country, nearly 20 years ago. Pedal along the tracks and through the tunnel for a unique way to enjoy the beautiful landscape of Jinnam Gyoban. Visitors can start from either Gaeun or Jinnam. 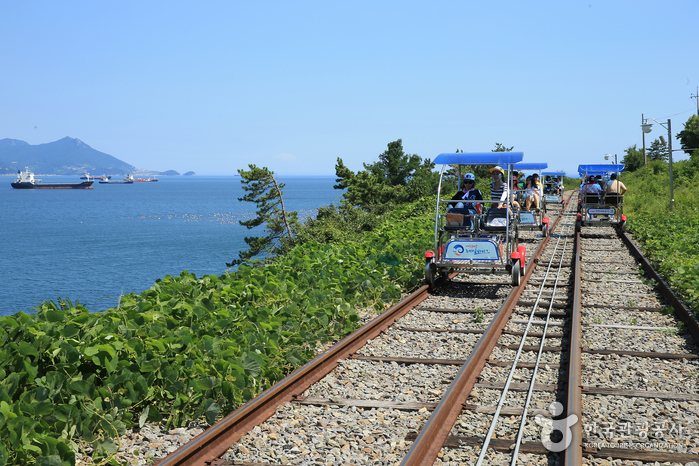 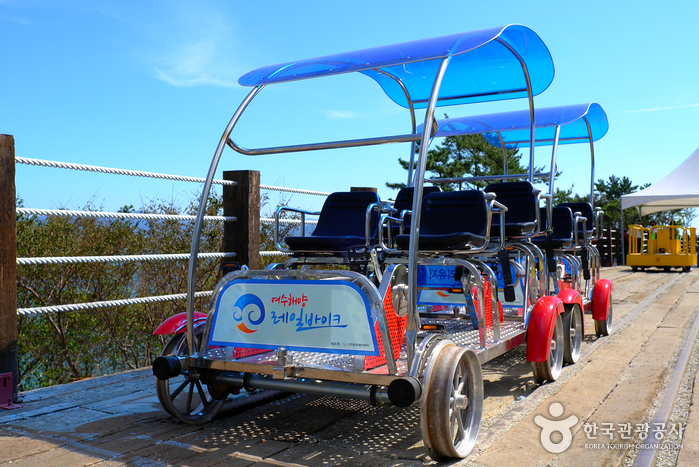 Yeosu Ocean Railbike is comprised of a 3.5 kilometer-long open track that follows the rocky coast of Yeosu. Passing through the open air as well as a tunnel section, it is a unique and exciting experience anyone can enjoy at a leisurely pace. The track and rail bikes undergo regular safety inspections, meaning it’s a completely safe way to enjoy Yeosu’s beautiful coast.

* Times are subject to change depending on weather conditions

Rail Bike is a bike that you pedal on the rail which is similar to train rail. It’s more exciting than just walking. During the ride, you can see many tourism spots like Udo Island, Yongnuni Orem, Susan Wind farms, and Seongsan Illchulbong Sunrise Peak. It’s really a unique experience and safe because there are safety guards. It’s highly recommended to go on a rail bike ride if you want to feel the calmness.